Black Star Pastry was founded in Sydney in 2008 and is the creator of the Strawberry Watermelon Cake. According to New York Times, it is the world’s most Instagrammed cake. – The ground floor pastry store is themed around the narrative Interstellar Travel, the iconic maglev display at the centre features nine revolving and levitating space capsules, displaying 9 cakes exclusively launched in Shanghai. It is an exploration of gravity vs weightlessness. Stainless-steel shelves holding thousands of meteorites, ascend, bend and turn towards the ceiling creating the illusion of rocks transfixed in space. The phrase ‘we are all just stardust’ can be found lining the edges of the communal tables - each letter seemingly dripping off the edge of the table following gravity, marking the transition from the concrete to the abstract. Elsewhere, retail areas are spread throughout the ground floor, stocked with coffee beans and apparel.

The first flagship store outside of Australia, it features Black Star Pastry’s new branding, with illustrations by one of the world’s most popular illustrator, Noritake. Accompanied by black stars, the boy and hedgehog characters are connected to the Black Star name and narrative.

The ground floor stirs up the incredible sensation of being aboard a spaceship, transporting you to a parallel universe upstairs. A new staircase clad in rough cast concrete terrazzo transports guests to the Black Star Gallery; an exhibition-style dining space – themed meta habitat – featuring artworks by four emerging international artists. Rowan Corkill, Olivia Steele, Debbie Lawson and Naoko Ito created four site-specific works. The collection of artworks together create a fabled habitat. A root word with Greek origins, ‘Meta’ means “after” or “beyond”. Here, ordinary and familiar objects related to human civilization are transformed by the distortion of time and space into metamorphic states. The art collection depicts roaming deer, trapped tree branches, glowing water streams, and bodies covered in withered leaves. Together it creates a fabled habitat that is sinister yet fantastical - a rich and pure landscape where the unusual and the unexpected is commonplace.

The gallery is a tearoom in the afternoon and a cocktail lounge by night. The ceiling is lined in metal grid. The floor is a rough concrete cast terrazzo tile, giving the space a hint of wildness and creating a museum like mood for the art.

A private room named There There, featuring an intimate bar wrapped in acid etched blue metal, is enclosed with a deep blue velvet curtain. A black timber floor folds up onto the walls sits in contrast against the exposed concrete of the existing site. A stainless-steel curved backdrop holds the wines on display.

The Gathering of the Clans The Gathering of the Clans (2021) is the latest in a series of covered sculptures depicting flora and fauna. In it, three stags each emerge out of a rug, as if the pattern has become quietly and magically animated. The stags hide and re-emerge from their carpets like animals in the woods, camouflaged behind the trees and among the glades. The use of Persian-style patterned carpets both hides and enhances the animal forms.

Water Needs No Guidance In this neon installation, Olivia Steele explores water as a mercurial emblem of transformation. Three interconnected illuminated streams – two vertical and one horizontal to vertical streams – are all made from vintage materials sourced throughout Europe. The one clandestine inscription is the piece’s namesake, reading “Water Needs No Guidance,” engraved on a mirror inside the bucket which creates a reflection of what’s above. Through this work, the artist tells us that water takes on many states and can acclimate to the environment that it’s in without manipulation or provocation.

Abscission. 2016 Photography by Rowan Corkill focuses on mankind’s relationship with nature. Abscission is the process by which plants shed leaves each fall, removing the old before a regrowth of the new in spring. This natural act of rejuvenation is akin to human ideas of resurrection or ablution, rising from decay and ridding oneself of our wrongdoings in an attempt to better ourselves. 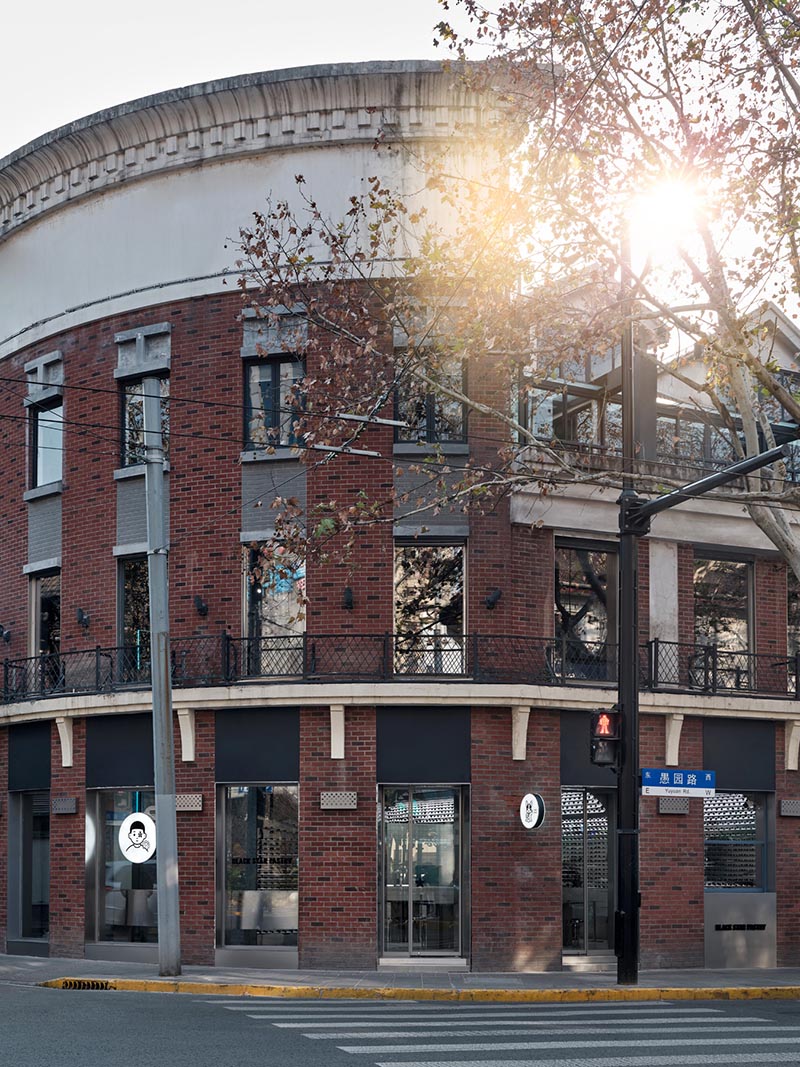 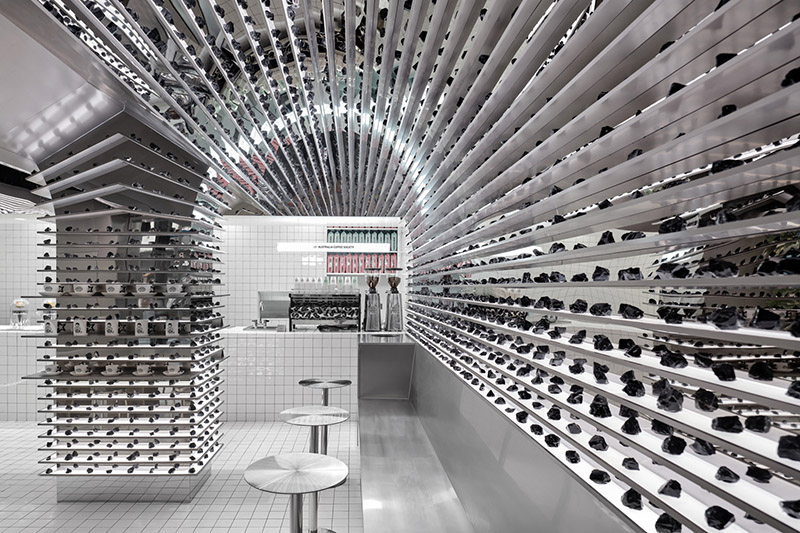 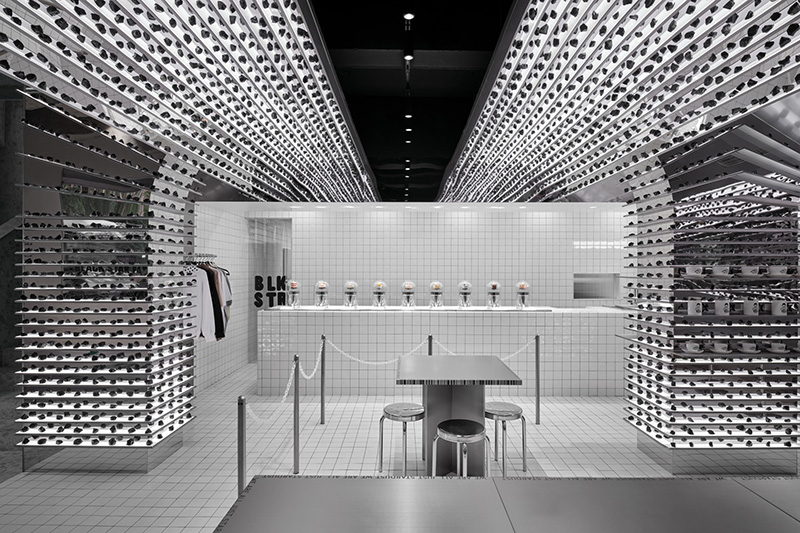 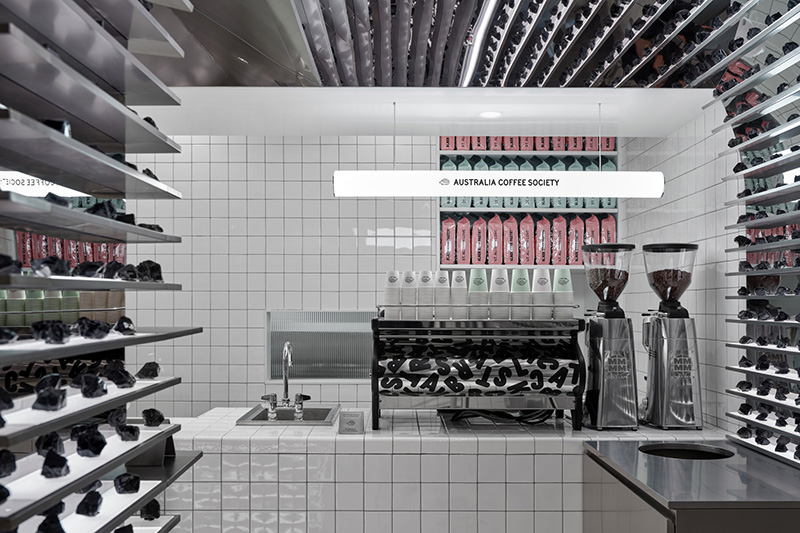 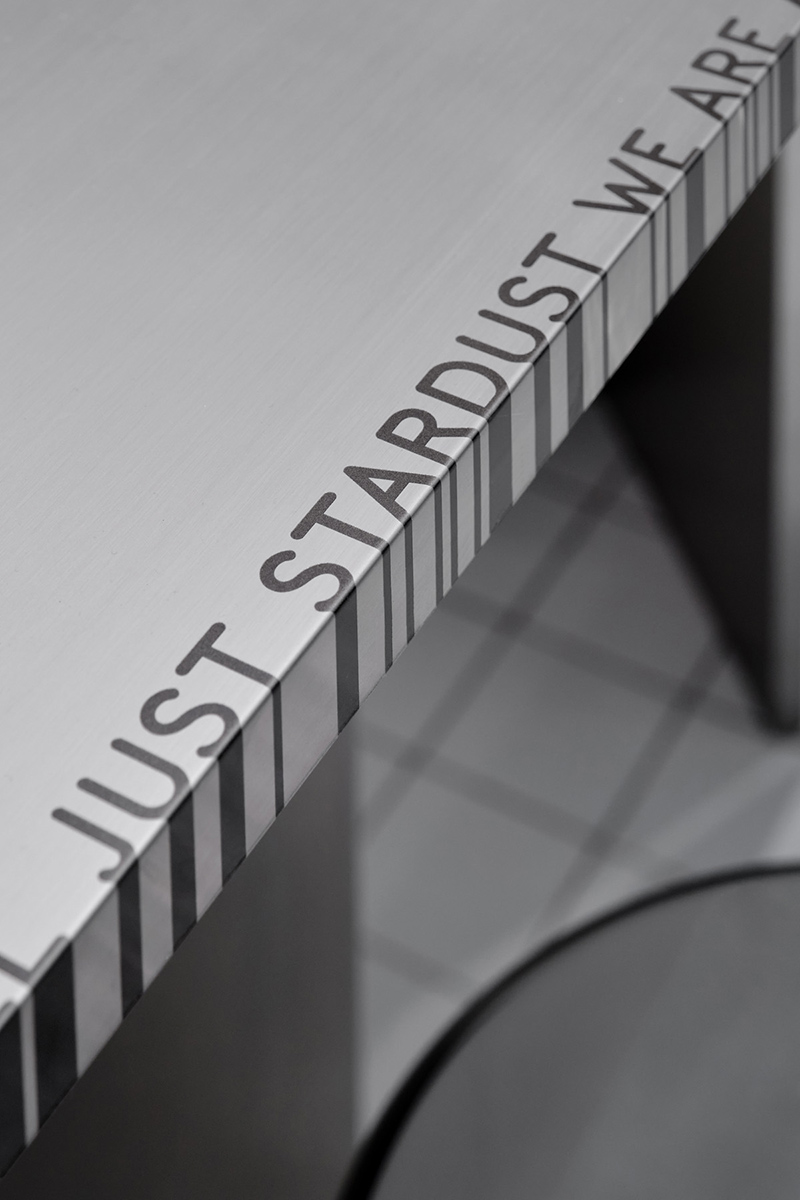 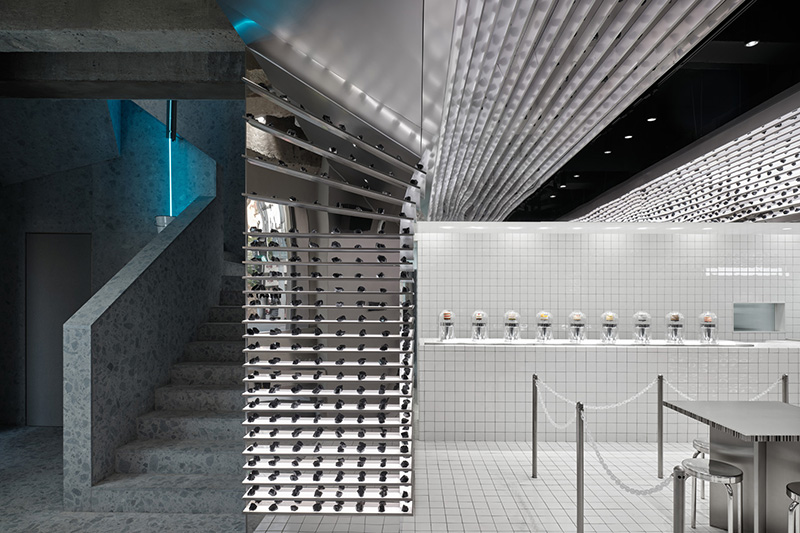 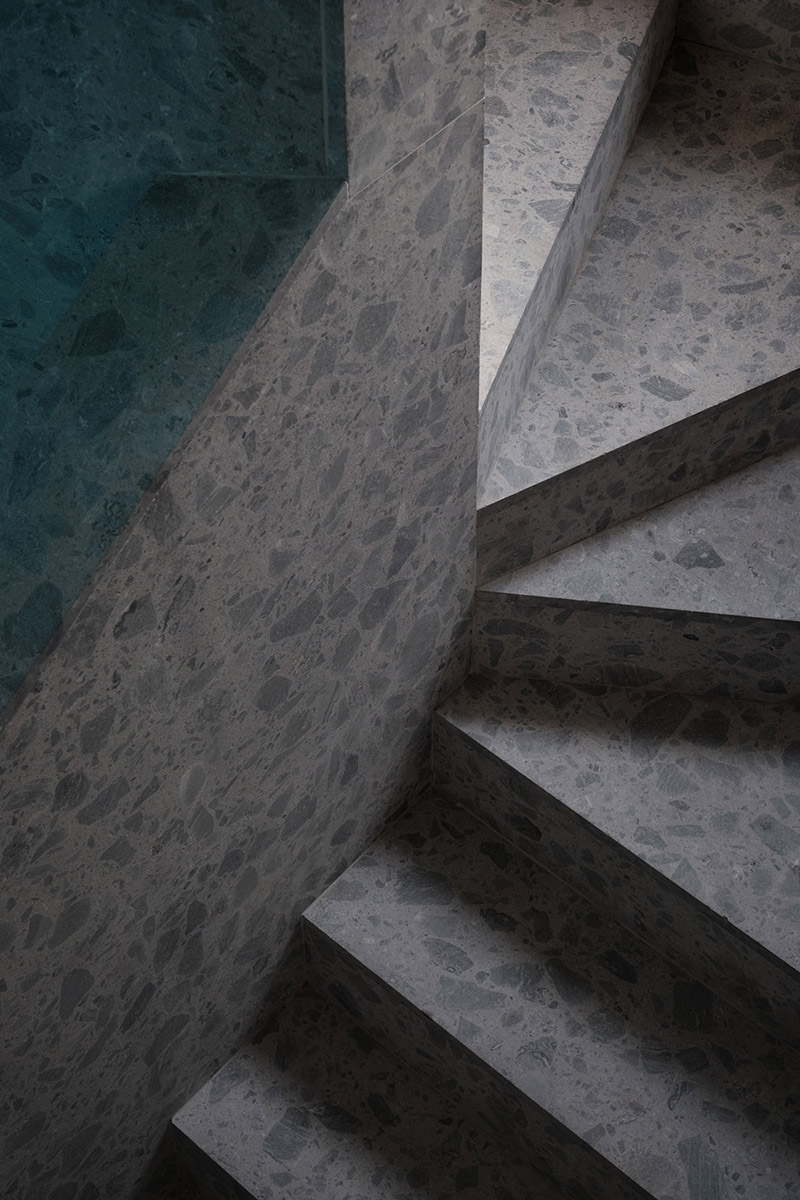 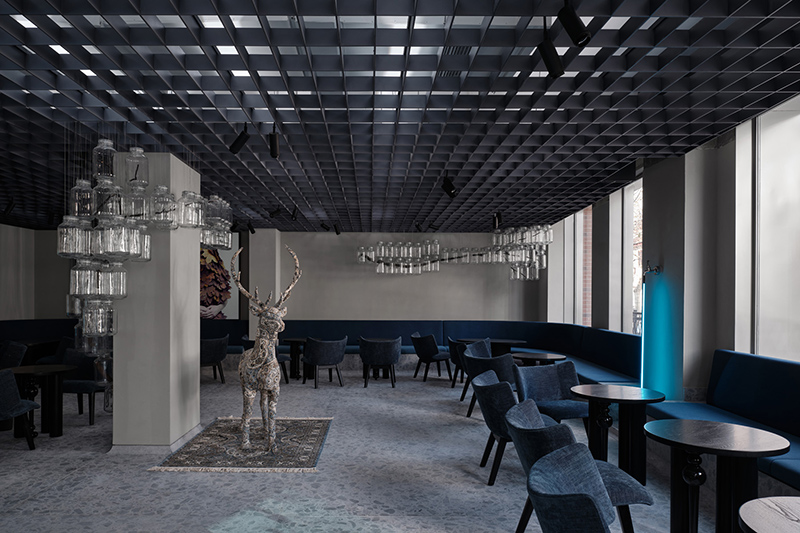 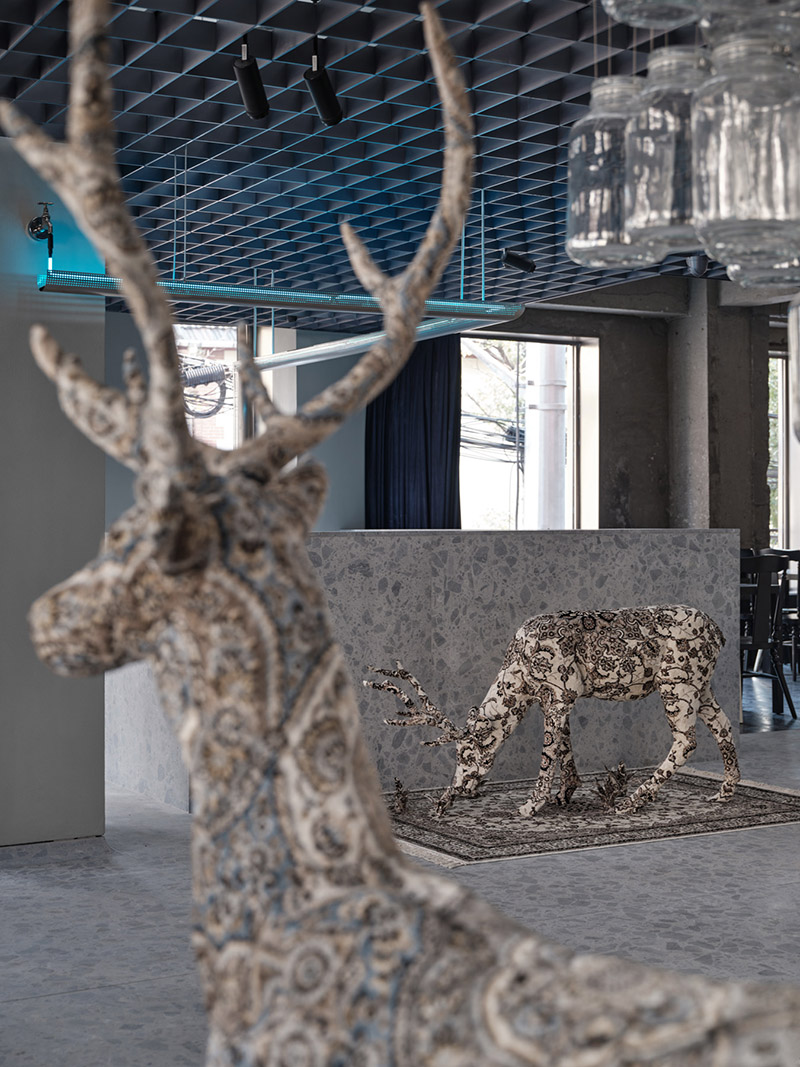 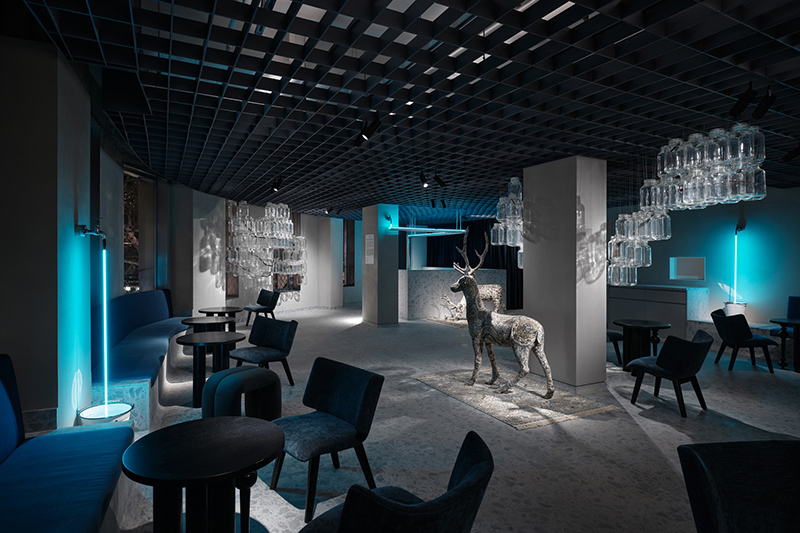 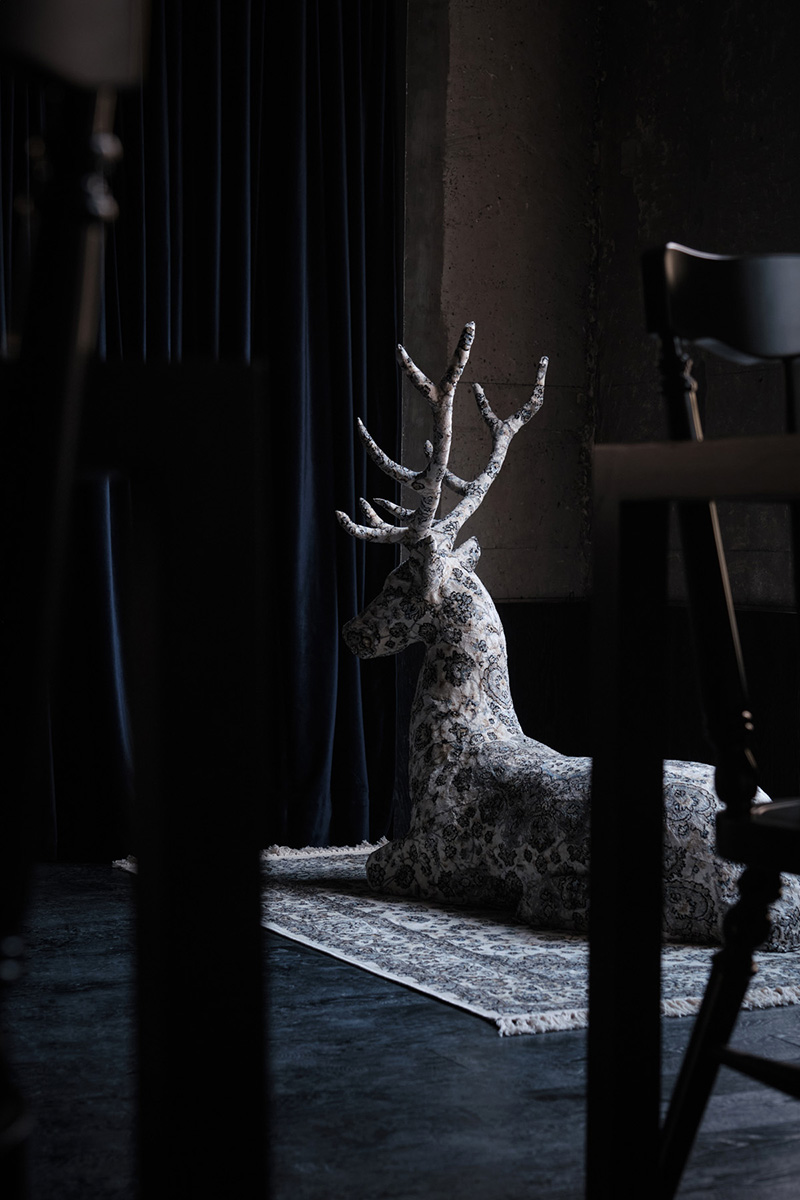 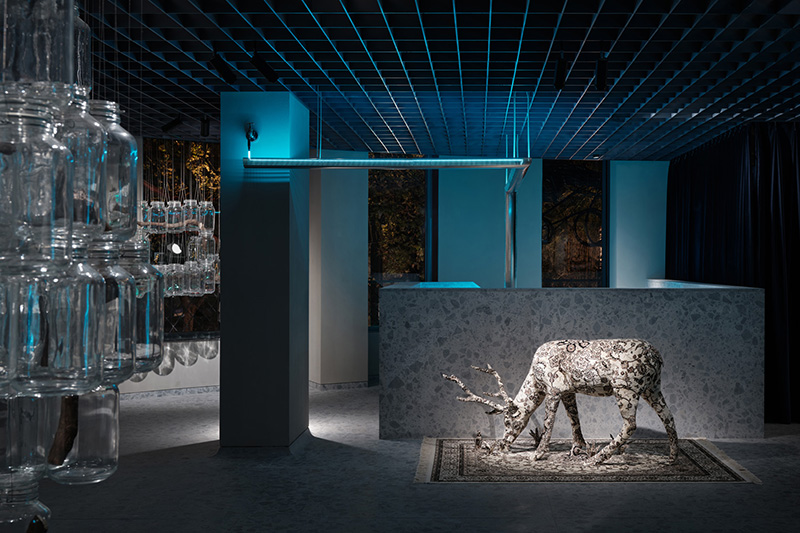 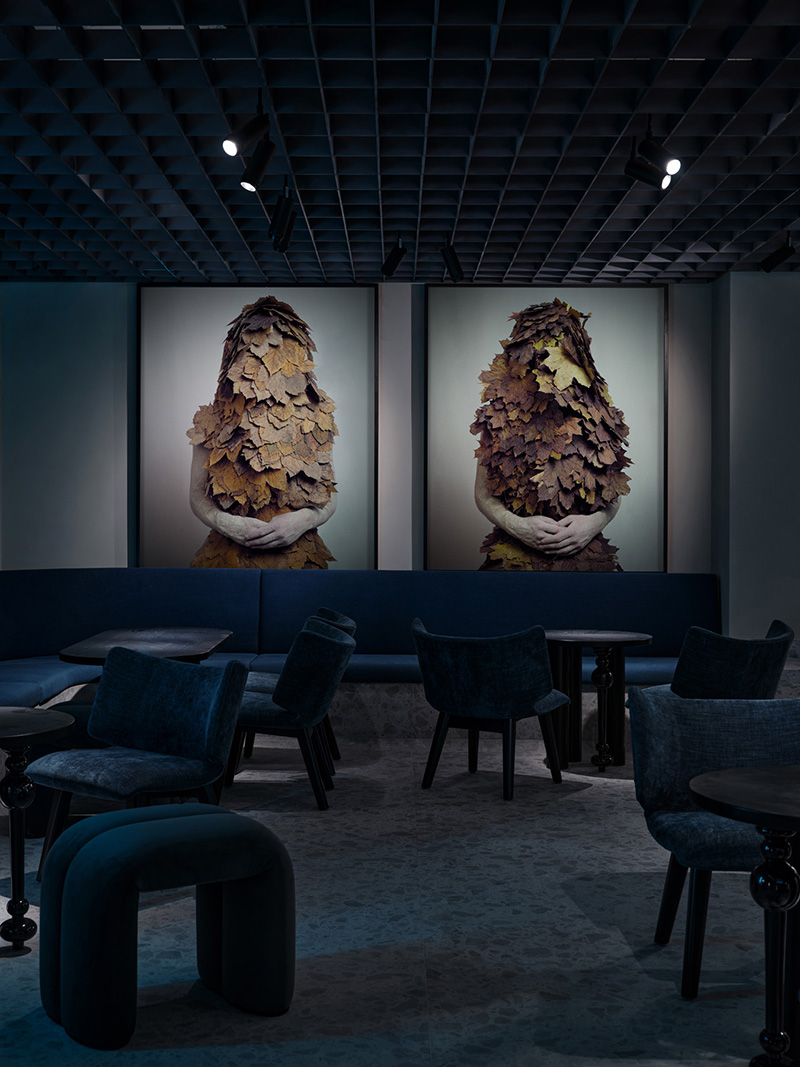 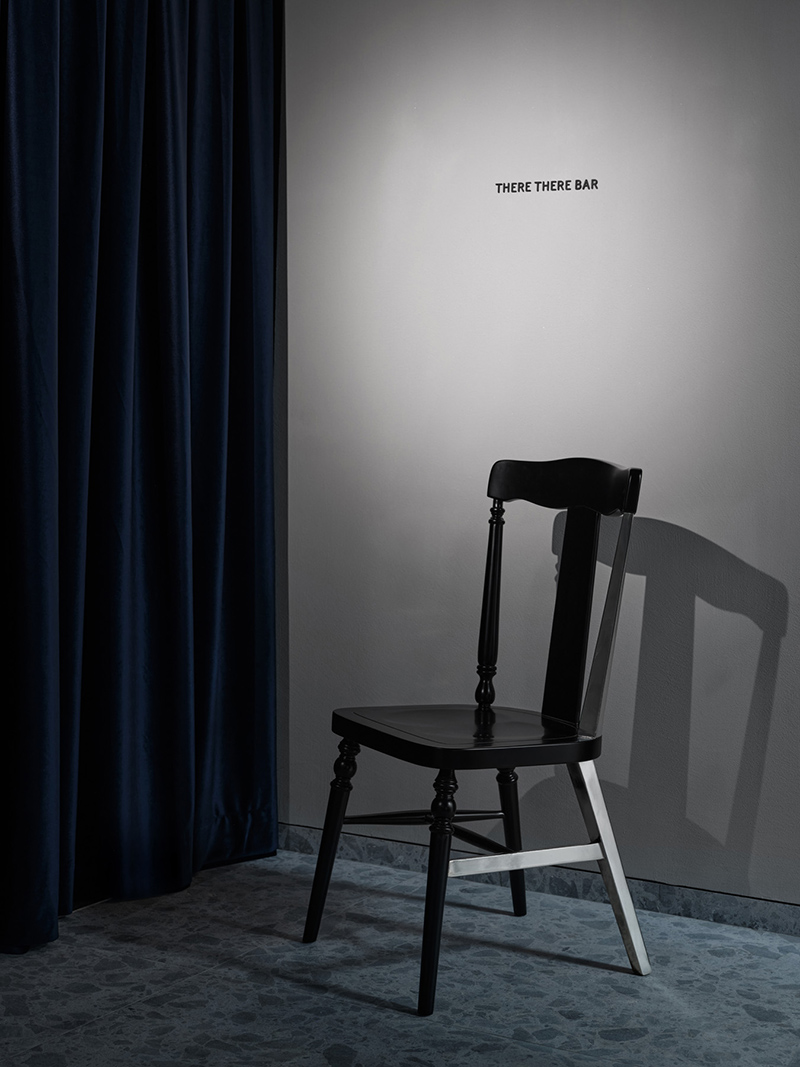 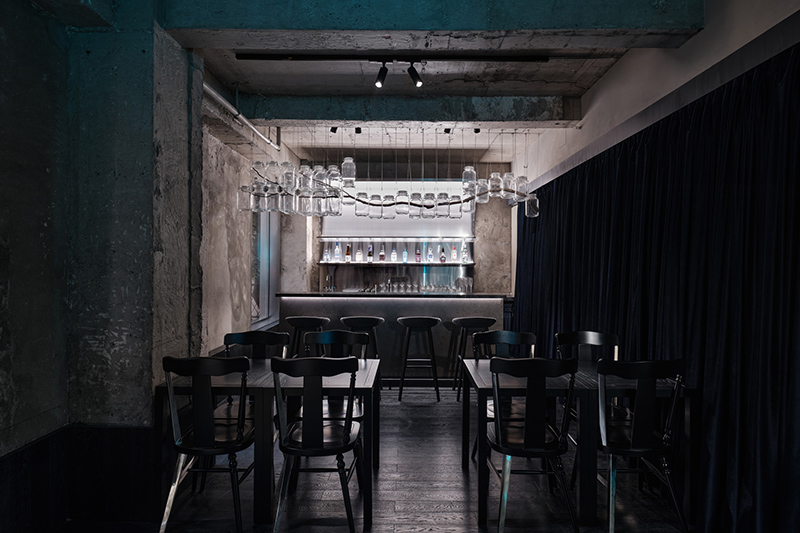 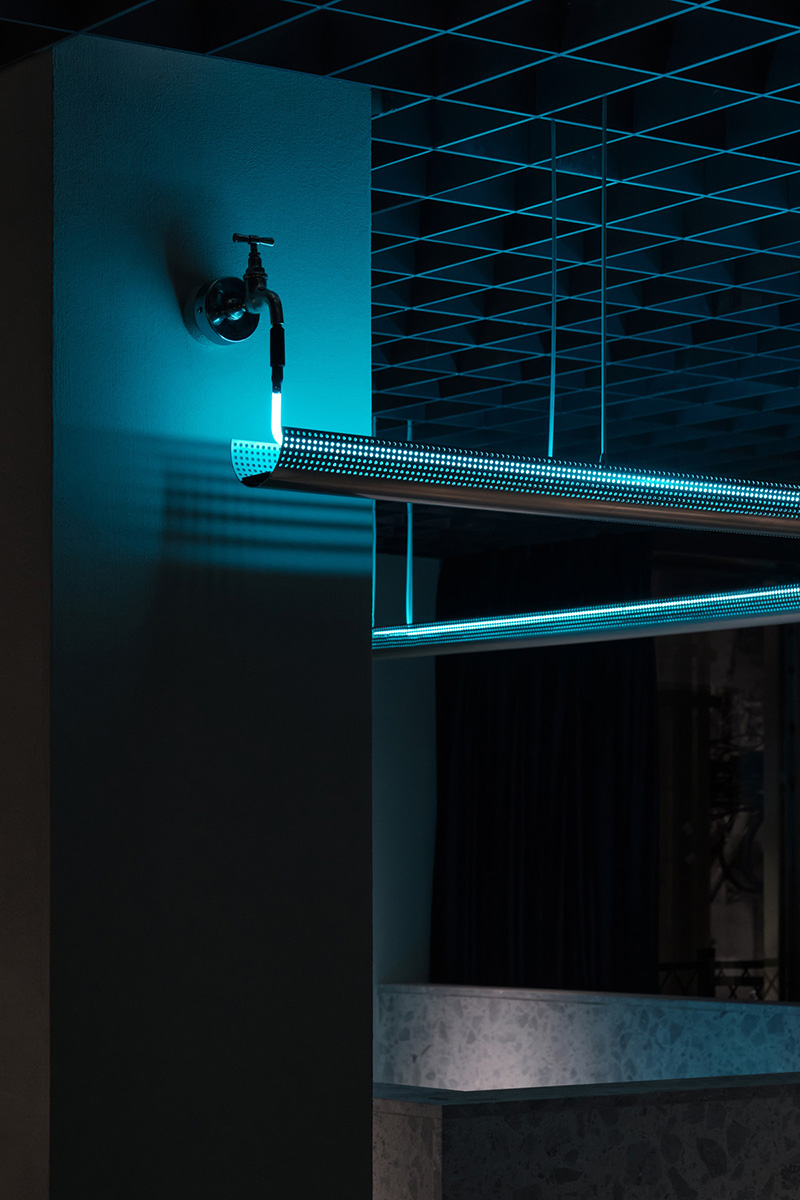 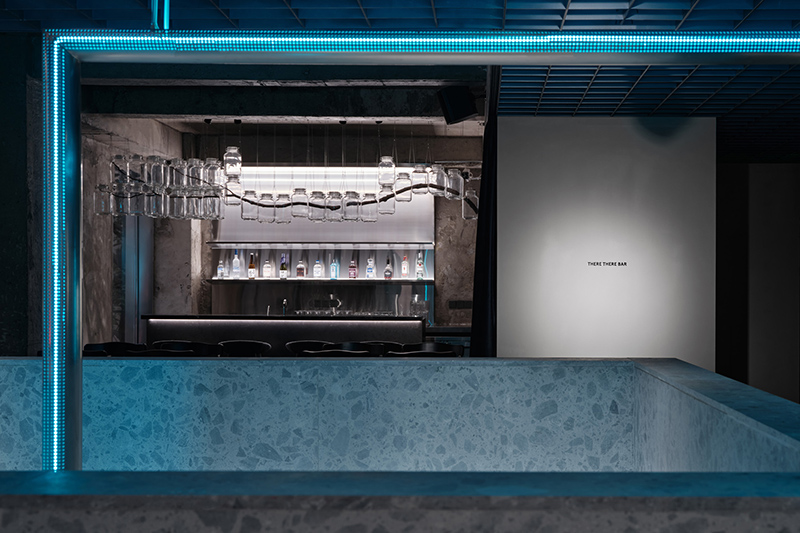 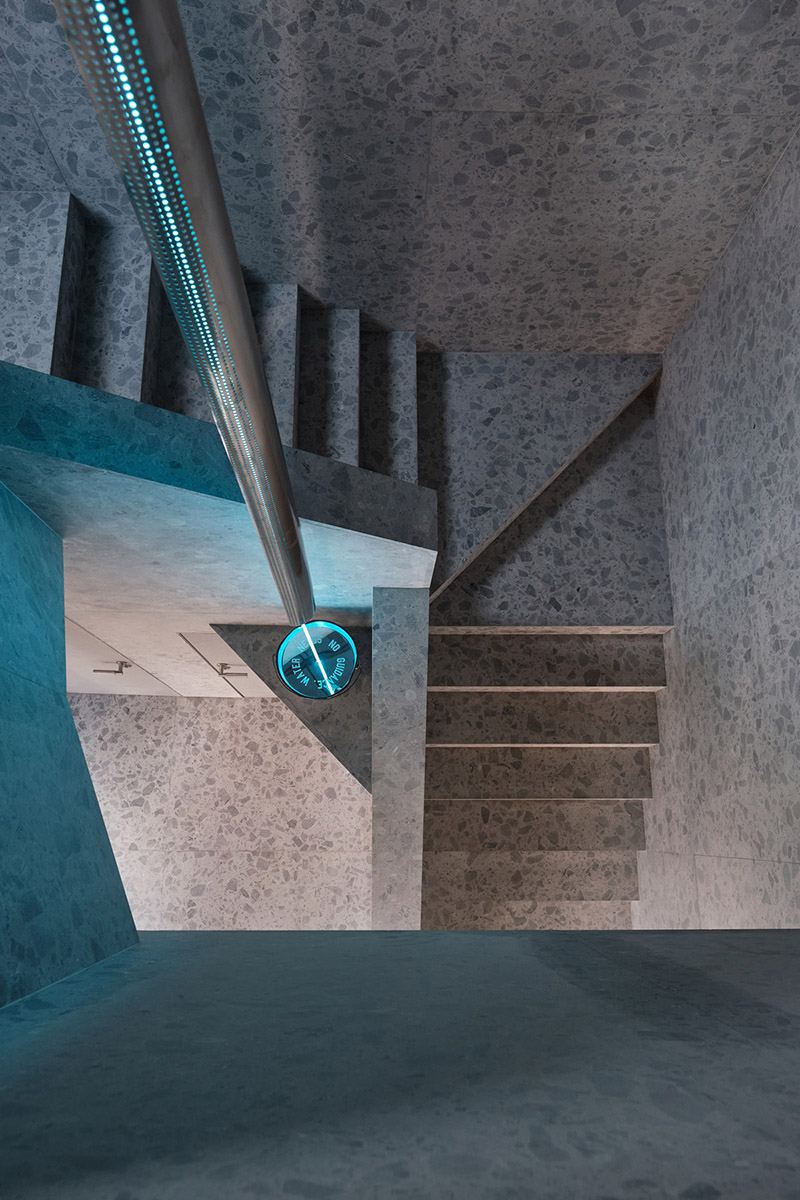 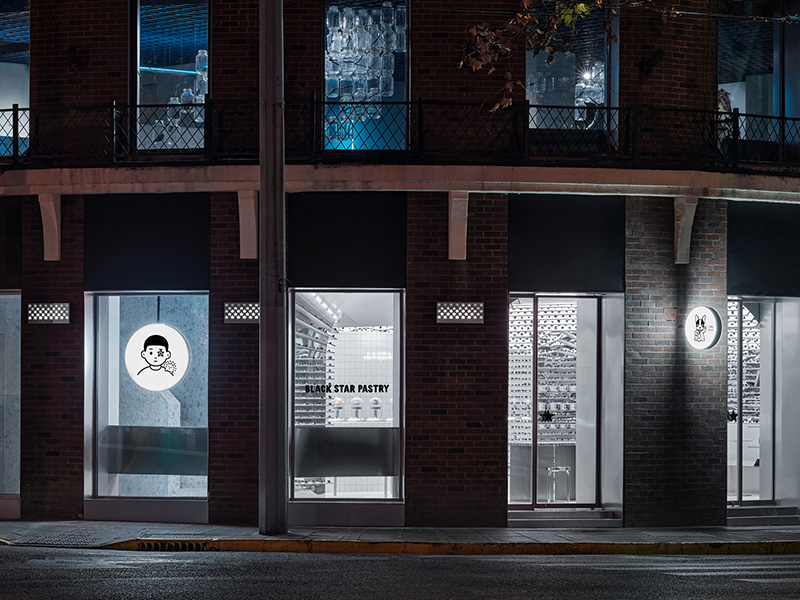 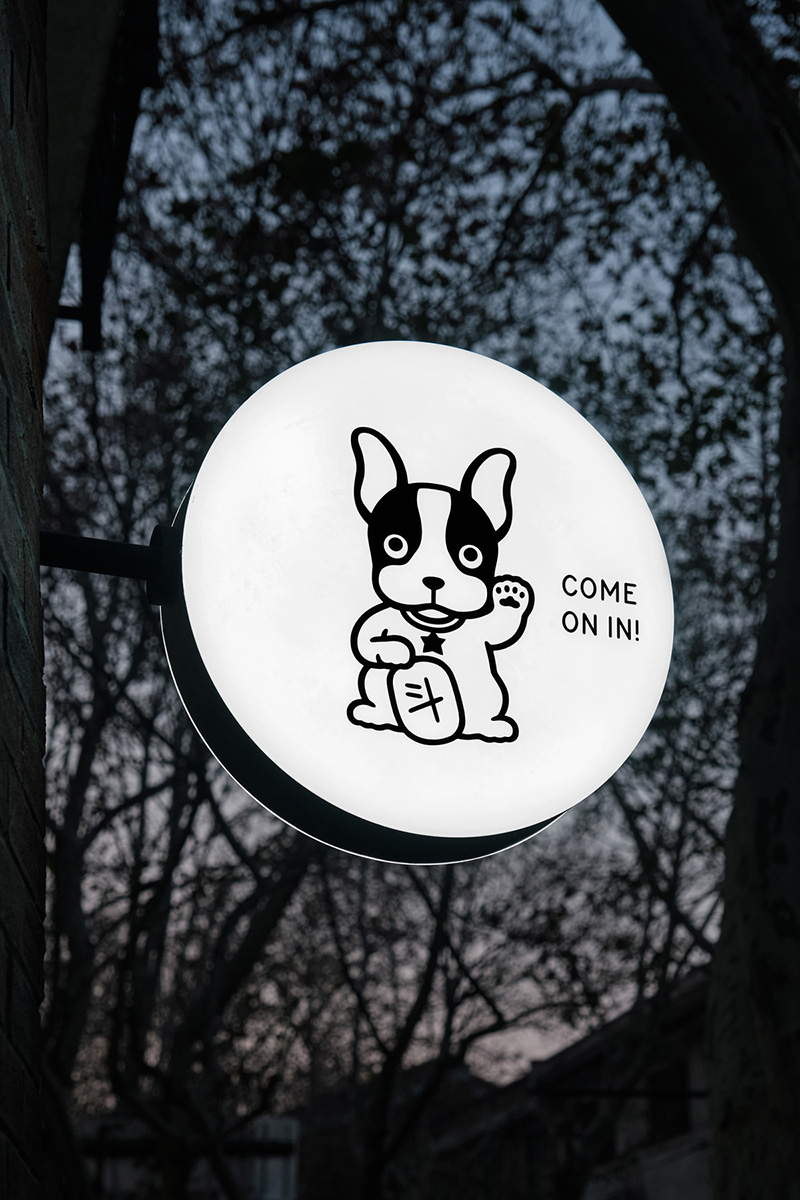 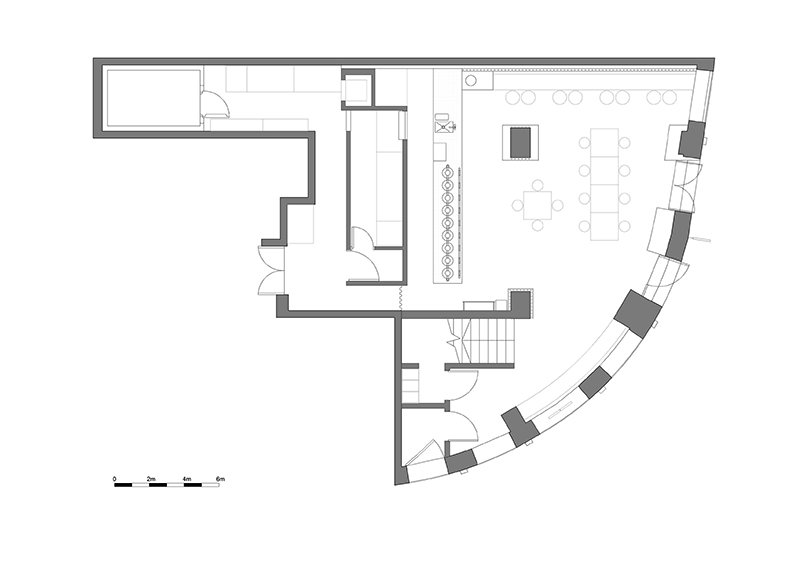